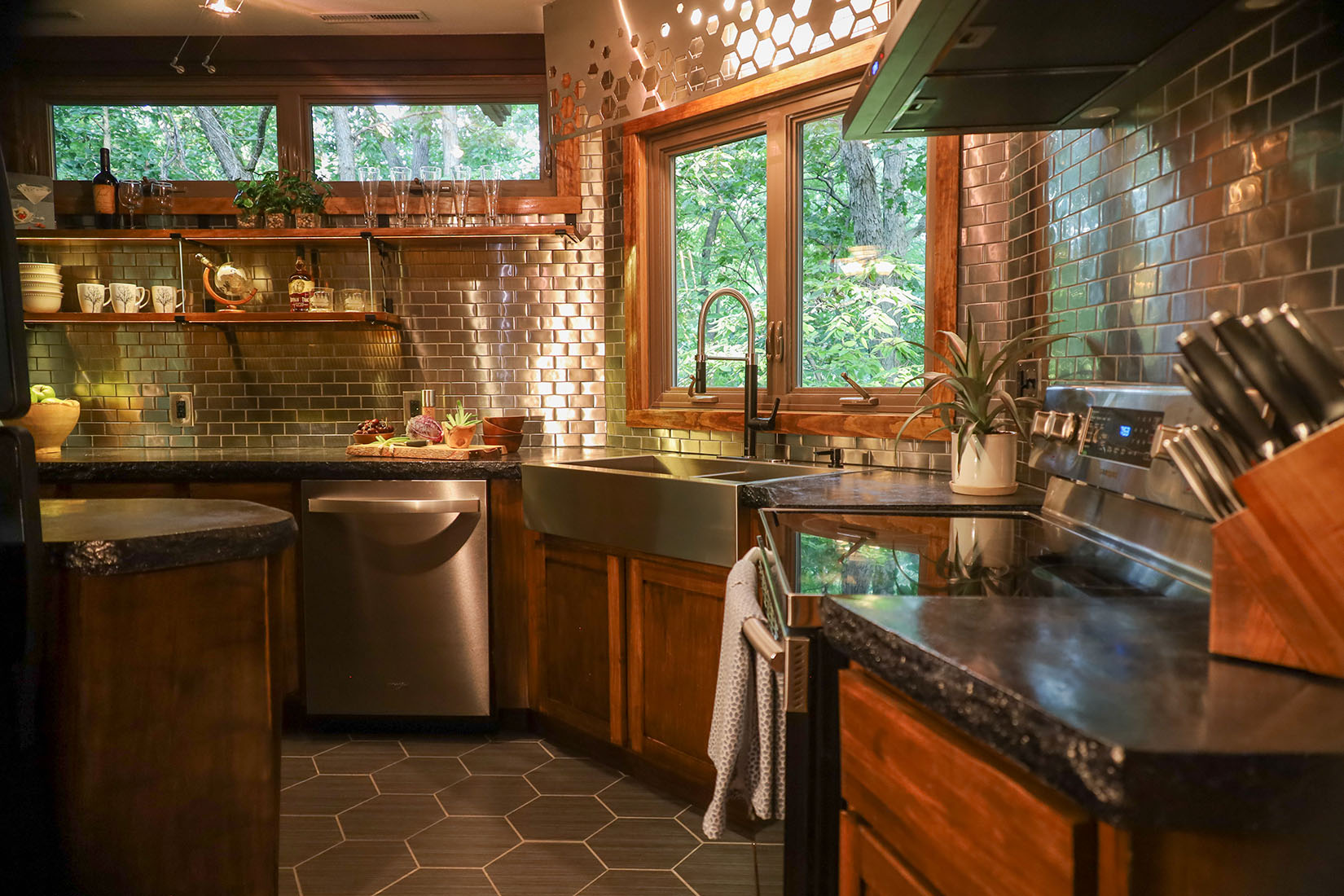 Not many young adults would trade in all – or almost all – their spare time to work on a house, but that is exactly what Josh Garton did for five years. The young bachelor in his 20s logged countless hours during evenings and on weekends tackling a whole-home renovation while teaching himself the necessary skills to do so along the way.
The result of this ultimate do-it-yourself project speaks for itself: a fully updated home reinvigorated with a modern flair. Bragging rights include an award-winning kitchen with an industrial-meets-rustic feel.

Soon after graduating from the University of Missouri and beginning a job as a structural engineer, Josh started looking at what a mortgage would cost compared to renting an apartment. He decided to become a homeowner.

Josh found his house — which he describes as a treehouse — nestled on a heavily wooded one-acre lot literally on the side of a hill. The three-story house resembles an inverted pyramid with each ascending level extending out further than the level below in a cantilevered fashion. The home has other quirky features. None of the interior walls converge at right angles while the ceilings are multi-level and feature a modified spoke system of structural ceiling beams.

Endeared by its design and unusual elements, Josh purchased the Frank Lloyd Wright-inspired structure in 2016.

“I was drawn to the house because it was so unique and different,” says Josh. “Plus, I could afford it.” Then, he got to work on making the 1,700-square-foot house his own.

When Josh initially moved in, the 3 bedroom 2.5 bathroom house had only one working toilet and one working shower — in separate bathrooms! Built in the 1970s, the house still featured remnants of that bygone era. Original pink shag carpet ran up the stairs while lime green cabinets filled the kitchen. He focused on improving the house instead of just making it livable.

“It definitely was a fixer-upper,” says Josh. “I was ready for a challenge.”

Josh has always liked working on things but had never taken on a project of this magnitude. He credits YouTube videos and tutorials on Google for arming him with the knowledge and encouragement to tackle many of the improvements himself. He started with the bedrooms and kept moving forward one room at a time.

“I’d pick one room and update that room, and then I’d move onto the next room” he says. “You can do a lot with a shop saw and a tape measure — and a drill.”

He taught himself to be a jack of all trades. He refinished the hardwood floors as well as installed new flooring in other areas, tiled walls and floors, stained cabinets and wrapped stainless steel in a couple areas in the kitchen. He even had the gumption to design and pour concrete countertops in the bathrooms and kitchen.

The kitchen proved to be the most in-depth room to overhaul so Josh collaborated with his aunt, Brenda Anderson, who owns a Kansas City-based interior design firm — Interior Design and Elements. Brenda wanted to give Josh a masculine kitchen by incorporating natural and rustic elements juxtaposed against gleaming stainless steel to create a more modern vibe.

“I took into account that Josh had a shoestring budget, lots of energy and a desire to execute as much of the design plan as he could himself,” according to Brenda. “He needed a vision and a plan. Then he took off.”

Breathing new life into the original kitchen meant addressing some inherent shortcomings and fixing patchwork repairs from over the years. The biggest challenge involved finding a better solution to hiding a large pipe protruding from the ceiling over the sink. The existing remedy involved an unsightly large wooden board as a cover that blocked the top third of the window.

While brainstorming with Josh, Brenda tossed out the idea of using a metal valance to disguise the pipe. Ten minutes later, Josh had taken this vision, created a valance using computer-aided design software and suggested stainless steel for the material. Josh incorporated cut-out hexagons to create visual interest and maximize the amount of natural light from the window while camouflaging the poorly-placed pipe.

To balance these reflective surfaces, the design added in select dark elements – custom black concrete countertops with a raw edge that Josh designed and created himself. The black stainless chef’s faucet, stainless steel apron sink and a sleek black exhaust hood continue the visual contrast for more of an industrial feel.

In addition, Josh added open floating shelves, made of reclaimed wood, for increased storage space. Josh also stained and installed the new cabinets — which had been ordered unfinished — to match the hand-sawn, square peg hardwood floors throughout the house.

The American Society of Interior Designers Missouri-West Kansas Chapter recently announced its annual Heartland Design Awards, and Josh’s kitchen was among the award winners. Brenda’s kitchen design received the silver award in the category for kitchen remodels 300 square feet or less — a feather in the cap for both Brenda and Josh given their collective efforts.

“This project reminded me that not every good design project needs a deep pocket or a professional general contractor,” Brenda says. “Rather, Josh’s motivation and tenacity — plus some blood, sweat and tears — have made his home what it is today.”

These days, Josh gets to enjoy the fruit of his labor living in a beautiful home tailored specifically for him. “I’m happy with how it turned out. I’m glad I went through the renovation, but I will buy my next house move-in ready,” Josh says with a chuckle.

Nothing to Shrub At

The Old Neighborhood Cafe Adds Mac & Cheese to the Menu

The Grind Extends its Hours at Four Locations