The Journey of a Lifetime

Home » Current Issue » CEO Magazine » The Journey of a Lifetime 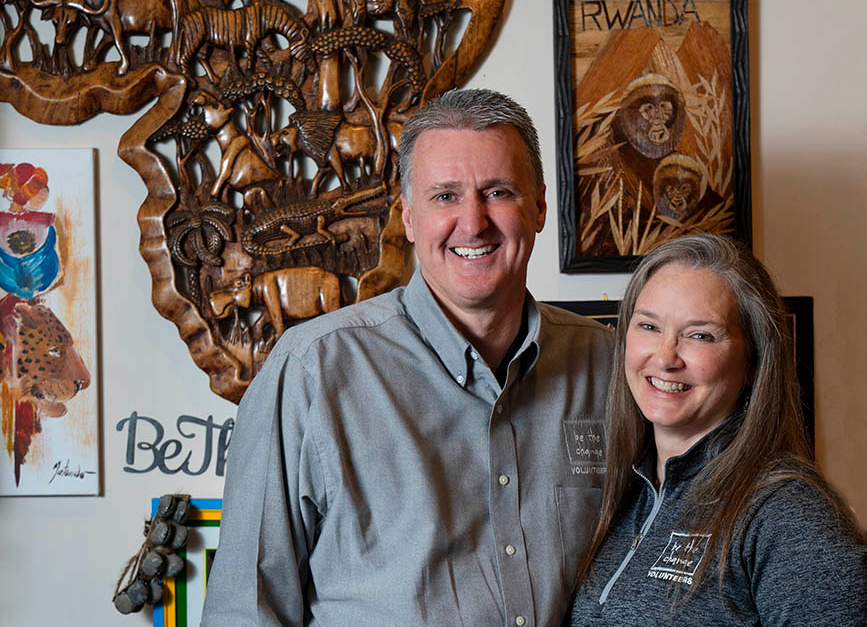 Some power couples are driven by ambition to make a name for themselves. To rise to the top of their Veterinary Medicine profession. To gather power and prestige. Jimi and Cristi Cook are looking for none of that. Among the most influential couples in Columbia, they are striving for nothing less than changing the world. One individual at a time, one community at a time, one nation at a time. And, so far, they have had an impact on thousands of people in communities in underdeveloped countries throughout the world.

They are co-founders of Be The Change Volunteers (BTCV), a nonprofit organization started 13 years ago with the goal of providing educational opportunities worldwide. In their spare time. Working with a 19-member advisory council. With two paid employees — one in Africa and the other based now in Arizona. With about 160 or so U.S. volunteers each year, who work alongside of partnering local volunteers from foreign nations who help with their projects. With requests for the group’s help coming from around the world. While doing all that, they find time to raise funds and coordinate four-to-six oversees trips each year where the volunteers help build schools, parks, playgrounds and libraries.

And now you can add book authors to their list of accomplishments. This year the couple wrote the book “Hand Delivered Hope,” which follows their adventures and challenges in helping communities around the world. All profits from the book go to the organization.

Jimi serves as chairman of the board of BTCV while Cristi serves as secretary/treasurer. In addition to their responsibilities for overseeing their nonprofit, they both have full-time responsibilities at the University of Missouri — Columbia. Jimi serves as the Allen Distinguished Chair in Orthopaedic Surgery and director of the Thompson Laboratory for Regenerative Orthopaedics and Mizzou BioJoint Center. Cristi is an assistant professor, also working at the Thompson Laboratory as well as a freelance veterinary radiologist. Between them, they have more than an armful of advanced degrees, published studies and honors in their chosen field of work: orthopedic research.

When asked how he can possibly manage to get so much done, Jimi says jokingly, “I just do my real job and then work on my other real job.” Then he pivots and becomes serious. “I have amazing teams in both areas of work who really help to make it all happen. Having energy is the easy part because I’m passionate about both jobs. I love developing new ideas that will help patients and thinking of regenerative solutions to orthopedic problems. I love being in the developing world, talking with and working with the people who live in other countries — they truly inspire me. And, I’m blessed that I don’t require a lot of sleep.”

BTCV doesn’t swoop into underdeveloped communities, build a school, then head back to the comforts of American life. The organization partners with local communities and won’t build anything without the help and guidance of people in the area who will make sure the project is sustainable. Cultural respect is an essential part of every project. Among the 52 projects they’ve worked on so far are a school in Bihar, India, a community campus in Gayaza, Uganda, and a high school in Chino, Peru. Their first project was helping repair a school in Rwanda that had been the site of genocidal murders.

For Cristi, one of the most challenging parts of working in underdeveloped parts of the world, such as Papua, New Guinea, is living within the cultural confines that limit the role of women. “I was raised to believe that I can do whatever I want, believing that if I put in the work, I could become a veterinarian and a radiologist. We were in Papua, New Guinea for 11 days for our first project there, and on the last couple of days, the men in the community finally gave me approval to get on the roof. Now, as we have built relationships through cultural exchange and more projects, local women are actually working on the school, hammering and sawing. And this was unheard of when we went there the first time,” she says.

Each project requires about a dozen American volunteers willing to travel from their comfortable homes to work and live for a few weeks in some of the world’s poorest communities. Volunteers pay for their own travel and food along with providing funds to cover much of the costs of the project. It’s not cruise ship travel. “One of my elevator speeches,” says Jimi, “is that I’m an orthopedic surgeon at a major university and I love to build toilets in the developing world. It has been amazing to see how clean, separate toilets, especially for female students, in addition to classrooms, libraries and playgrounds really do change everything for these deserving communities.”

Debbie Waggoner has been volunteering for BTCV for the past seven years and has learned that each project is about far more than constructing a building or a playground. “Jimi and Cristi promote building relationships more than just building structures,” she says.

When trying to explain how the Cooks accomplish so much, Grant Venable, one of the two BTCV fulltime employees, says, “I get only 24 hours each day, but somehow the Cooks get 36 hours each day, and I haven’t really figured that out yet.” He attributes their ability to keep so many balls in the air to their time management skills and their commitment to changing the world.

Venable, who lived in Columbia but now lives in Arizona, is in charge of much of the day-to-day operation of BTCV. “I want volunteers to be very engaged and in tune with our mission and the projects we’re working on,” he says. Explaining that mission, he adds, “We’re building schools because education creates jobs and jobs are the only way out of poverty.”

Jimi, who has two doctoral degrees from Mizzou, a DVM and a PhD, has seen firsthand the opportunities for a full life that education brings. “It’s something that opened every door for me in my career, and it’s something no one can ever take away from you. BTCV believes in Mandela’s quotation, ‘Education is the most powerful weapon you can use to change the world.’”

From their base in Columbia, Jimi and Cristi Cook are turning Mandela’s words into schools, libraries and playgrounds that truly are changing the world.