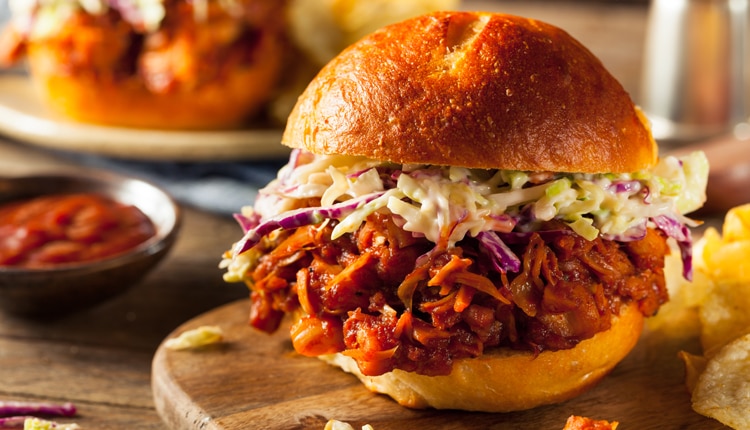 No secret in vegan and vegetarian circles, jackfruit has been gaining traction in mainstream cuisine as many look to eat fewer meat-based meals or try more exotic foods. Jackfruit is having a moment. A species of tree in the fig, mulberry and bread-fruit family native to southwest India, the jackfruit produces a large, bright green, spiky-textured fruit that can weigh as much as 50 pounds.

With climate change a growing concern, and drought and heat waves becoming more common, jackfruit is being eyed by researchers across the globe, including at the University of Agriculture Sciences in Bangalore, India, and the Chicago Botanic Garden, as a significant future food source.

It’s plentiful and grows in tropical and subtropical areas, so it would do well in a warmer world. Ironically, in countries where it’s native, the ubiquitous fruit is often a neglected crop, viewed as a poor man’s food called “pauper’s fruit.”

The spiky specimen is rich in vitamin C, carotenoids and flavanones, which help reduce the risk of heart disease. It’s also recommended for treating skin disorders, asthma, allergies, gastrointestinal disorders and building the immune system. Patients on certain medications, such as those that lower blood sugar, should only consume jackfruit under supervision, however, because it also helps lower blood sugar.

Jackfruit is no pro when it comes to protein — something to keep in mind if you’re relying on it as a meat substitute. Although no match for meat in the protein department, jackfruit is hailed within the fruit family for its protein content because typically most fruits don’t offer as much.

Jackfruit is versatile and can be used for main dishes, desserts and smoothies. The seeds, which have more protein than the pulp, can be roasted and eaten, or ground into flour. You can wrap food in the leaves and cook it, much like with banana leaves.

Treat unripe or green jackfruit as you would any other starch — similar to tofu, you season it with the flavor you want it to take on. Green jackfruit has a meaty, stringy texture, which is why some compare it to pulled pork and why “pulled pork” jackfruit recipes abound. Some say unripe jack-fruit tastes sort of like artichoke hearts. But again, when seasoned it takes on the flavor you add. It can be used as a meat alternative in curries, a taco filling and meatless “pulled pork.” When using it for tacos, consider adding a protein punch via black or refried beans.

The ripe fruit has a bright, banana-like taste and can be used like a mango. In Asian countries it’s served atop sticky rice or over ice cream.

Although jackfruit does come fresh, you’ll have better luck finding it canned. In addition to it being hard to come by, working with fresh jackfruit is challenging because of its thick rind and composition of pods, seeds and flesh, which is one reason why the canned version is popular. Canned jackfruit is frequently sold at Asian markets. For the healthiest version, look for jackfruit packaged in its own juice/brine or water that doesn’t contain sweeteners.

2 20-ounce cans of young green jackfruit in water or brine (not jackfruit in syrup)
1 ounce olive oil or vegetable oil
1 small onion, sliced
2 cloves garlic, minced
Salt and pepper as needed
1 cup vegetable stock or water
1 cup barbecue sauce, more as needed (check label to find a vegetarian variety if desired)
Directions
Drain jackfruit and cut into thin wedges. In a medium sauce-pan over medium heat, add oil and onion. Cook until edges of onion start to develop color. Add garlic and sliced jackfruit, then season lightly with salt and pepper. Cook for a few minutes until most excess moisture has cooked away. Add vegetable stock and cook for about 10 to 15 minutes until jackfruit has become tender and mashes easily with a fork or spoon. If needed, add more water and cook longer until tender.Once tender and most of the moisture has cooked away, add barbecue sauce and mix thoroughly. Spread mixture onto a sheet tray or casserole dish. Bake in a 300-degree oven for 15 to 20 minutes until mixture has started to dry out and has some crisp ends. Transfer back into the saucepan and add more bar-becue sauce if desired. Season with salt and pepper as needed.

Serve on a bun plain, with slaw or in the place of anywhere you might normally use pulled pork.

Petco Planning to Move This Year

Just Google It: What Columbians Want To Know