Beyond The Fourth Wall

Home » Entertainment » Beyond The Fourth Wall 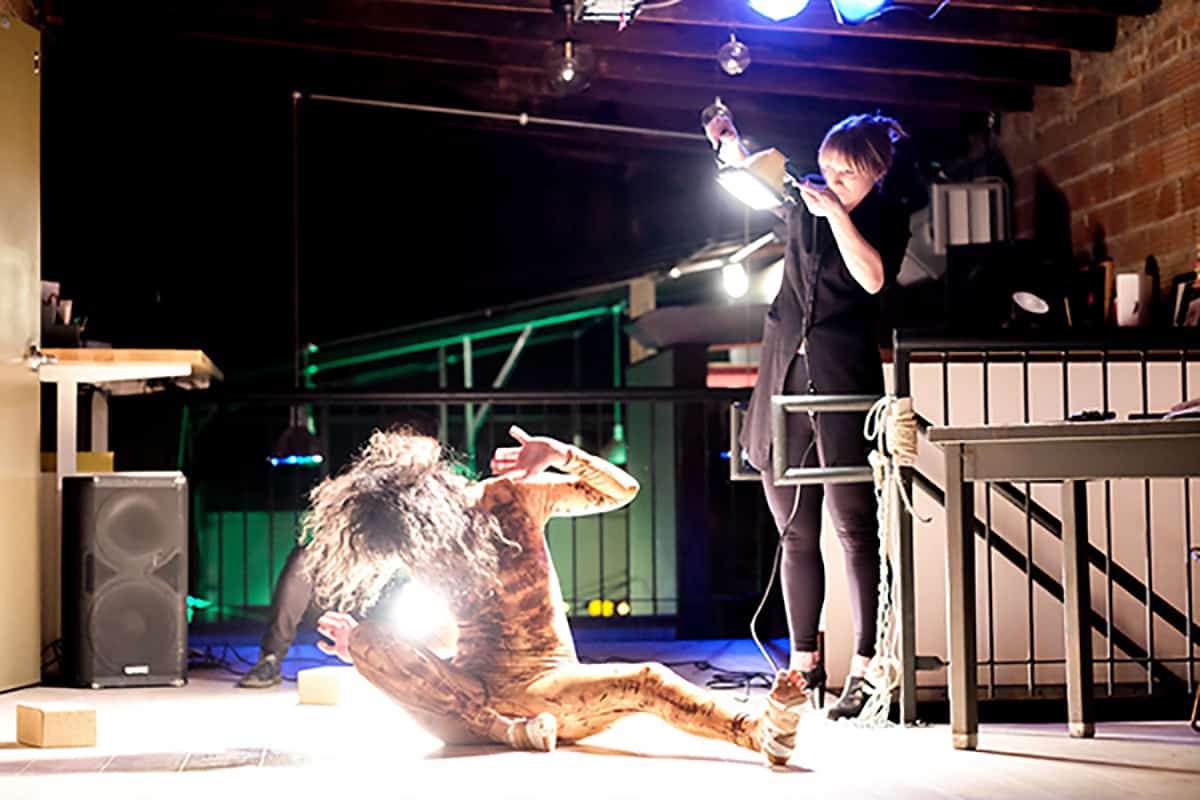 Elizabeth Braaten Palmieri had built an extensive resume. An actor, director, writer and educator, she had no shortage of accomplishments in her theatrical career. Yet wit in this artist burned the fire of an entrepreneur, aiming to inspire audiences with her dynamic and unique brand of performance.

The daughter of a Minnesota farmer and a business woman, Palmieri grew up chasing the path not of her parents, but of her siblings.

“All three of their children ended up going into the arts in some capacity,”
Palmieri says. “My sister is a film professor in Florida, and then my brother teaches screen and stage writing in Los Angeles. We’re all spread out, but we’re also interweaving in the work that we do all the time.”

Having done every job imaginable in New York City, Palmieri knew that she wanted to find work that involved her passion for theater. After settling in Columbia, Palmieri was teaching and directing at TRYPS (Theatre Reaching Young People in Schools) when she met Emily Adams. The two bonded over their talents and shared experiences.

“We were kind of at a loss of what our place was in this community,” Palmieri says. “There wasn’t any professional theater that we felt like we would add to, and we were both struggling to commute to Kansas City or St. Louis for gigs. So, we decided, ‘Let’s do our own thing!’ ”

Focusing on theatrical innovation and collaboration alongside other local artists, Palmieri and Adams founded GreenHouse Theatre Project, a nonprofit organization. Unlike other theaters in the community, GreenHouse Theatre Project performs its three-show seasons outside of a set brick-and-mortar location. Instead, the company aligns with other venues such as art galleries and studios to perform site-specific productions where the audience is encouraged to explore the space while watching the action unfold.

The vision for this avant-garde endeavor began seven years ago when Palmieri thought of performing a three-person adaptation of “A Christmas Carol.” The plan was for one actor to play Scrooge, then have Palmieri and Adams play all the other roles. With the concept in mind, and Palmieri herself writing the adaptation, all that was left to do was secure a location. That’s when Palmieri and Adams came across the Columbia Art League.

“We did three nights and sold them all out,” Palmieri says. “It turned out to be this awesome thing because it happened right before Christmas and because of the people attending the show, a lot of whom had never been in there before, they sold a bunch of [art]work.”

With the overwhelming success of “A Christmas Carol,” and the proof-of-concept showing positive results, Palmieri and Adams set their sights on their next production. They wanted to continue to use well-known theatrical works, but they wanted to use the space provided to them to develop new twists on familiar tales. Their production of

“Macbeth” was set in a “Mad Men”-esque era with men in suits and women in evening gowns all taking place within Yoga Sol. More recently, GreenHouse Theatre Project produced a reimagining of “Frankenstein,” where the monster was portrayed by a female dancer and the audience was required to wear domino masks over their eyes to enter. The goal of each production is to challenge what the audience expects theater to be.

For the creators, the challenge lies in coming up with ways to top their last performance.

“I need a challenge,” Palmieri says.

“Feeling that pressure is good. I’ve always been someone who only works well under pressure.”

Fortunately for Palmieri, that pressure has only intensified since the departure of her co-founder Adams, who went back to the United Kingdom. Now Palmieri runs the Columbia business alone, juggling the grant-writing, fundraising, ticketing and artistic direction among numerous other responsibilities. In addition, Palmieri has also pushed herself to write and develop more original scripts such as last year’s “To the Sea: A Tale of Ebb and Flow.”

“Honestly, I’ll set a season and I will put a new play on that season and it hasn’t been written yet,” Palmieri says. “I know what it is; I can see it in my head and I have a million notes on it, but I haven’t sat down to put pen to paper on it. So that forces me to write.”

The next season for GreenHouse Theatre Project remains a mystery, a though Palmieri was able to offer a few hints. For the 2018-19 year, the theater plans to do a re-working of a classic play and is also interested in pursuing a collaboration with the escape-room company, Breakout CoMo. What may come out of that partnership is left up to the imagination, but with Palmieri’s gears already turning, there’s no doubt that it will be a one-of-a-kind performance.