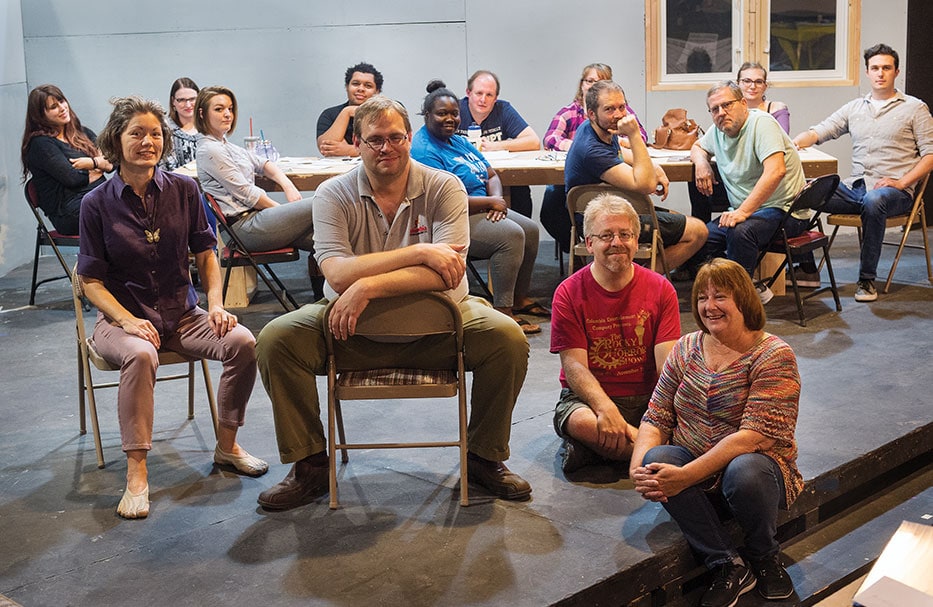 One of the least popular pieces of mail to receive, next to bills, is the official summons for jury duty. Despite the disdain for this civic responsibility, there’s no denying that courtroom dramas have been a mainstay of entertainment for generations. Sixty years ago, “12 Angry Men” arrived in theaters and captivated audiences with its portrayal of a jury in deliberation after hearing the proceedings of a murder trial.

As more of a study of the individual jurors than a deep dive into the facts of the case, the film investigates the concepts of personal bias and perception. In fact, the film was so well written that in 2007, it was selected to become part of the United States Film Registry by the Library of Congress for its cultural and historical significance.

Equally impressed by the original film was Christopher Gould, director of Columbia Entertainment Company’s upcoming production of “12 Angry Jurors.” Christopher fell in love with the characters specifically for their variety of ambitions and fears, something he strives to achieve in the stage adaptation. While the original movie investigates themes and social commentary that stand the test of time, the casting of the play has been updated to reflect modern society. In creating the cast, Christopher was sure to be inclusive of all races and genders to represent a true jury of peers.

“I wanted to make it as difficult as possible for the audience to determine who ‘those people’ are because everyone is represented,” Christopher says.

The fear of “those people” or “the other” is a widespread theme throughout the play. Each of the jurors has their own background which informs their judgement of the subject on trial as well as the other members of the jury. Their attitudes about race specifically put them at odds with one another as their decision will literally determine life or death for the man on trial. One juror is quick to announce their guilty verdict while another campaigns to convince their peers of reasonable doubt. All the while, each juror is questioned about the reasons behind their motivations and convictions.

With such a personal, intricate theme, Christopher wanted to make sure his cast had room to explore their own fears and biases to form fully developed characters. The first week of rehearsals was dedicated to full cast read throughs of the script where each of the actors were encouraged to share their observations with one another about the complex story. Afterward, Christopher met with each actor individually for them to share their character’s personal story, a process which Christopher admits the audience may not see.

“It’s nothing that the audience is ever going to know, but it’s in the head of the actor and it makes for a much richer, much more complex performance. You can’t get around the fact that this play is centered around 12 people sitting around a table talking and in some cases, yelling at each other. The show is about the dialogue, the whole point is the dialogue, and as long as the dialogue is performed truthfully the story is riveting.”

To further drive the importance of the dialogue, the set of “12 Angry Jurors” is kept intentionally kept simple with the center piece being the long conference table for the jurors to argue over. Unique to this show, each of the characters are onstage for nearly the entire length of the production. In the confined space, the lights also play a key role in the show. While they don’t change, the heat of the lamps creates a pressure cooker for the characters, the longer they’re on stage, the more the conflict builds towards an inevitable explosion.

Christopher hopes that audience members approach the show with an open mind to the pursuit of truth, another theme that occurs regularly throughout the show. The play investigates truth from a variety of opinions and ultimately asks the question of the audience to decide, is truth a matter of perspective? By filtering this theme through a cross section of society, Christopher hopes that “12 Angry Jurors” will get the audience thinking about their own views of current events and get them to question their fears and feelings towards the things they don’t understand. Hopefully, the audience will walk away touched.

As for final thoughts about the production, Christopher believes that this is the right time for this classic play to be performed because, “There is always an ‘other’ to fear and always a truth to discover.”

Columbia Entertainment Company presents “12 Angry Jurors” this month. The show runs November 2–5 and 9–12. Show times for Thursday, Friday, and Saturday are 7:30 p.m. while Sunday matinees are at 2 p.m. Tickets are available at cectheatre.org.

Art Onstage and Off