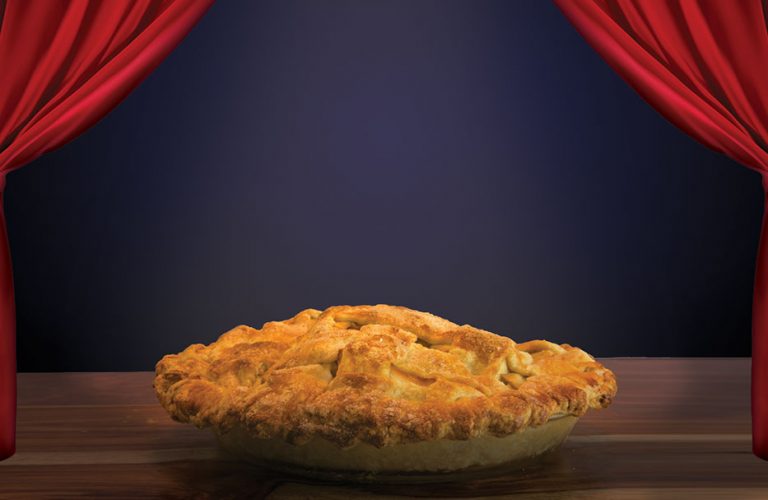 This month, audiences at Columbia Entertainment Company are in for a special treat with the first ever staging of the melodrama, “Miss Kitty’s Little Pie Shoppe… or How to Make Some Big Dough.” This original work, written by Don Mueller who serves as the treasurer on the board for CEC, was inspired by his relationship with Kurt Mirtsching, manager of Shakespeare’s Pizza. Learning of Kurt’s day-to-day life of crafting pies and working with customers, Don decided to write a highly stylized show very loosely based on the local chain.

Instead of setting the show in the modern day, Don sets the clock back to 1890, before the era of delivery pizza, unless by carriage. The play follows a mother and daughter team, Mama Shake and Miss Kitty, who happen to own a traditional pie shop featuring the best fruit pies in town. Their craft garners them a great deal of attention from local laborers, who come in to scoop up a pie before their daily journey into work.

Not all of the attention is for the best, as the wealthy man from back east, Mr. John, also takes notice of Miss Kitty. With his sidekick, Justin, the sinister business elitist purchases all the fruit throughout the town with the hope that Miss Kitty will have no choice but to bring him in as a partner and accept his marriage proposal. Defiantly, Miss Kitty and Mama Shake instead decide to ditch the fruit pie business to make tomato pies. At first the new menu doesn’t gain a lot of support but when the hero, Will, brings in cheese to pair with the new dish, a culinary phenomenon is discovered.

Those not familiar with melodrama will be thrilled to find the style is well suited for family entertainment. Audience members are encouraged to respond to the action on stage with cheers for the heroes and boos and hisses for the villains. Characters in the show range from the mild-mannered, common place every man (or woman) facing impossible odds to ridiculous, cartoonish, mustache twirling villains (think: Snidely Whiplash). These characters make it easy for all age groups to get attached to and involved with the events as they unfold.

Adding to the excitement of live theater is that “Miss Kitty’s Little Pie Shop” focuses more on the characters themselves and how they interact with one another. Don Mueller is encouraging actors to make the roles their own by improvising lines, actions and jokes. In fact, Mueller’s vision is for the script to act as more of a guideline for the story and allow the players to set the pace of the plot by reading the audience’s reactions.

“Performances may completely differ from one night to the next,” says Mueller. “I know how I want the events to go — I start with the beginning and keep working to the end, but along the way, the actors won’t have to follow the script word-for-word.”

For Mueller, interaction with the audience is another key focus in this production. For the first time, Columbia Entertainment Company is producing “dinner theater-lite.” Shakespeare’s will be on-hand for the event selling pizza by the slice so that audiences can truly feel as though they’re a part of the action on stage. In addition, the players of the 10-person cast will be on hand and in character to chat with attendees while they eat, tell pizza jokes and puns and host games and contests for the kids in attendance. All of this sets the stage for a production designed to introduce younger audiences to the theatrical community.

For writer Don Mueller, this marks a major milestone. A former teacher for 30 years in Gasconade, Missouri, Mueller came to Columbia in 2002 and joined Columbia Entertainment Company shortly thereafter. “As a student and teacher, I have found creative expression to be empowering as it requires collaboration from different groups. Actors, technicians, sometimes musicians all have to come together to create a final product worthy of an audience.”

Mueller wrote “Miss Kitty’s Pie Shop” over 5 years ago and has been searching for a prime opportunity to have it performed ever since. He has spent many years workshopping his play with other prominent community theater leaders. Last year, the play had a live reading at Columbia Entertainment Company where the production board decided to pursue creating the right cooperative event at the right time. With the last full theatrical performance for families occurring over a year ago with “The Little Mermaid,” the board at Columbia Entertainment Company felt this month was the opportune moment. As the company prepares for their first foray into dinner and drama, Mueller is hopeful that success of this event will lead to similar occurrences on an annual basis.

Those interested in bringing out the family for an action-packed evening while supporting the local melodrama can come out to Columbia Entertainment Company at 6:30 p.m. on Sept. 14–16 and at 12:30 p.m. on Sept. 17.

For more information such as tickets and pricing, visit cectheatre.org.

Zen and the Art of Compost Maintenance