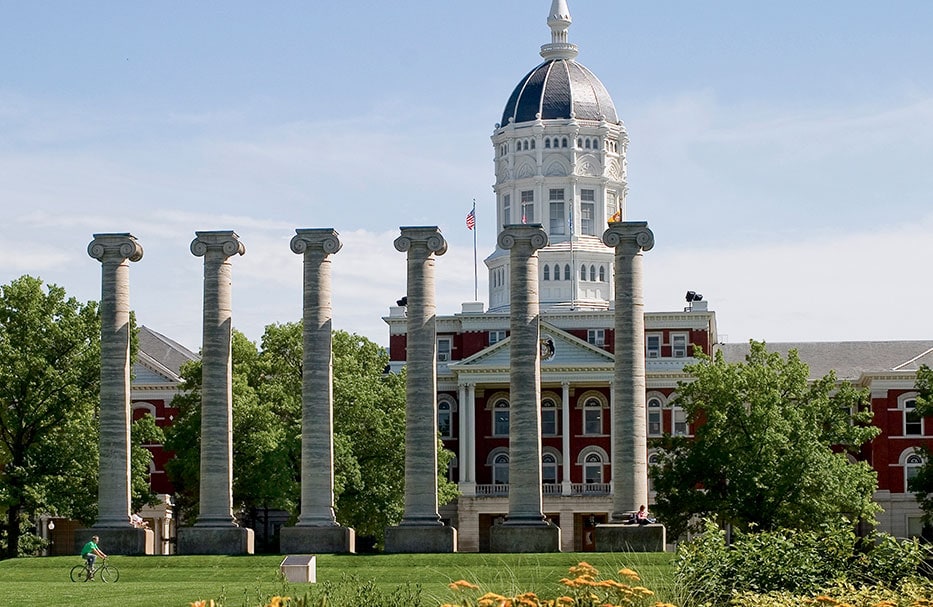 There are those places that fire up a memory when thinking of home. Places that are well-known to locals and visitors alike. For us, these Columbia landmarks always come to mind. There are so many great places to highlight, this was a little like trying to pick our favorite child…

Francis Quadrangle
As G.F. Rothwell, president of the University of Missouri–Columbia Board of Curators, wrote in 1892: “Let these columns stand. Let them stand a thousand years. Crown them with an arch, memorial to the men who in their magnificent presence learned what life and duty are, and how to live the one and do the other. They will be to all the rallying point of future devotion and service to the University. For surely the strongest bulwark around any institution is the ceaseless recollection and loving devotion of its intellectual children. No university can be most attractive and great till age has brought it this support. No argument persuades like sentiment, and no force impels like affection.”

Francis Quadrangle is home to two of Mizzou’s most notable landmarks: The columns and Jesse Hall. A popular backdrop for graduation photos, engagements, wedding photos and more, the columns have made a recorded appearance in many lives throughout the years they have stood. They were, and still are, the only structure left standing after a fierce fire ripped through the academic hall in 1892. Jesse Hall can be seen from miles away, its dome rising high into the sky. It is one of the most handsome structures on Mizzou’s campus and houses many events including graduation ceremonies, True/False showings, performing artists and speakers and more.

Les Bourgeois Vineyards & Winery
Though it’s actually located on the outskirts of Rocheport, a quaint river town 15 minutes west of Columbia, most of us know this winery well. The A-Frame and Bistro, which both overlook the Missouri River, are go-to destinations for sorority moms’ weekends, graduation parties, weddings or just a casual afternoon or evening with friends and family. And, a summer sunset from the A-Frame deck? It’s truly hard to beat.

The Big Tree
Towering over a sea of cornfields, standing alone like a wise and proud protector, the big Bur Oak Tree is an unforgettable sight just outside Columbia’s city limits. It has been captured in many photographs and even more memories, and has been the sight of proposals, picnics and a stopping place for long-distance bikers. It’s a landmark well-known by Katy Trail travelers and locals alike. Though age — it’s estimated to be 300-400 years old — is beginning to take a toll on its height and width, the bur oak still holds steady to the title of largest Bur Oak tree in the state.