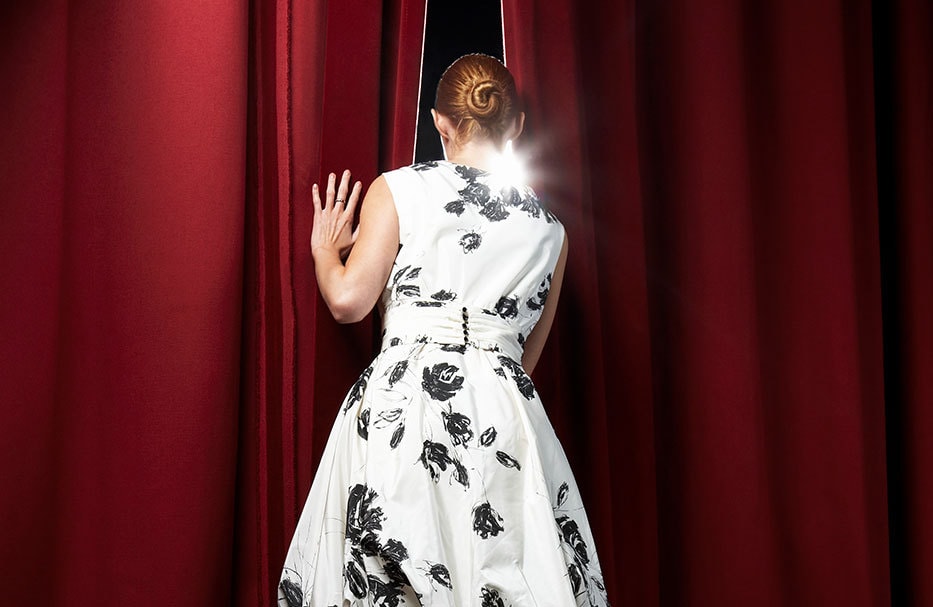 One of the most common questions an actor gets asked aside from “How do you memorize all those lines?” is “Did you really have to kiss?” The answer, depending on the actor, is equal parts hilarious as it is impossibly awkward. This month, Talking Horse Productions presents the comedy “Stage Kiss” by Sarah Ruhl, which hilariously dives into this query headfirst with behind-the-scenes details.

In the play, two actors, known as “He” and She,” are cast in a fictitious production of “The Last Kiss” which, as the name implies, requires the actors to share in some on-stage chemistry.

The trouble is, the two actors are also former lovers. As He and She do their best to work professionally together, they are surrounded by the usual cavalcade of supporting characters each accompanied by their own backstage antics. While rehearsals are underway, He and She begin to reconnect and rekindle their romantic relationship but what neither party knows is whether their feelings for one another are the result of rehearsed passion or genuine affection.

Bringing this intricate and hilarious production to life is director Barbara Salvadori. Formerly of Brazil, Barbara found her theatrical start by attending a “Theatre of the Oppressed” workshop. Working with the influential theatrical personality Augusto Boal, Barbara said, “I was completely hooked, so I decided to pursue a theatre degree in college.”

Fast forward to today, and Barbara is now a PhD student in the University of Missouri’s theatre department where she has had ample opportunities to work on various projects as a director and dramaturg. Outside of the university, Barbara has been equally impressed with the city of Columbia’s artistic community.

“Moving here, I was really pleased with this aspect of the city. There are always opportunities to take part in creative work — thanks to all the community and academic theaters in town.”
Having served as a board member for three years, Barbara is no stranger to the local theatre Talking Horse Productions. “Stage Kiss” is the third production Barbara will have directed at the venue.

“When I first read “Stage Kiss,” I was particularly drawn to the metatheatrical nature of the play.” Barbara says. “The play(s) within the play, and these layers of reality Ruhl creates heighten the relationships and situations presented in the play, and help us see the comical (and the bittersweet) in them. I like how she approaches this blurring of the lines between art and life: the former lovers who come together to play former lovers onstage. To me, it feels like there is this underlying question informing everything: does art really imitate life or is it the other way around? I’m also attracted to Ruhl’s sense of humor and the way she uses the characters’ slightly self-deprecating tone to tackle some potentially serious life questions.”

While “Stage Kiss” offers a variety of avenues of the human psyche to explore, Barbara doesn’t concern herself with making sure the audience receives a specific message. Instead, her goal in directing is to allow the actors to tell a story that gives the audience the opportunity to decide for themselves what the larger interpretation is.

For those coming to attend the performance Barbara, ever the educator, does offer a thought-provoking challenge. “I hope people will, somehow, be able to relate; to get to know a little bit about these characters on stage and, maybe, in the process, even get to know something new about themselves and their own thoughts and reactions (and, of course, if they have fun while doing this, that’s okay too!).”

The Art of Truth