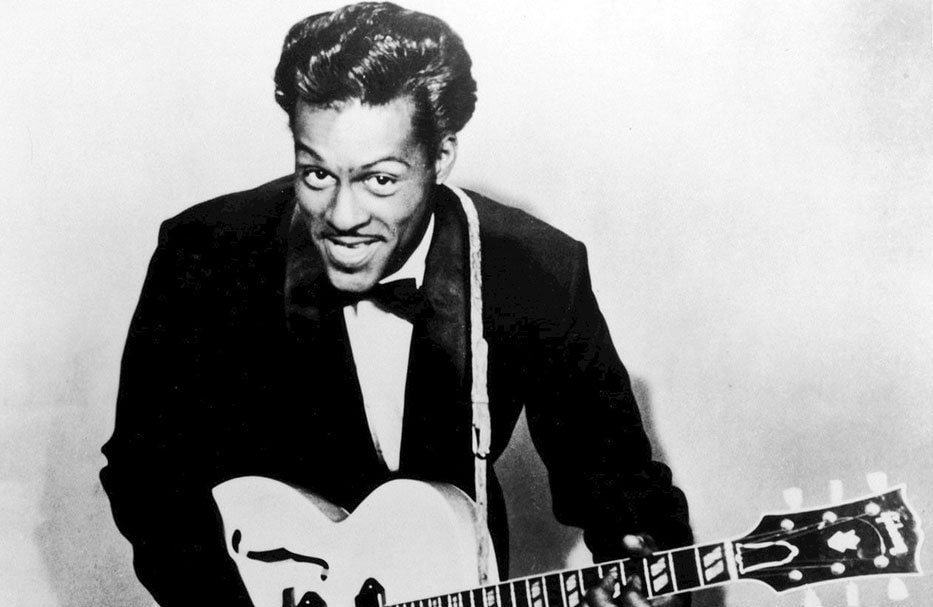 “While no individual can be said to have invented rock and roll, Chuck Berry comes the closest of any single figure to being the one who put all the essential pieces together. It was his particular genius to graft country and western guitar licks onto a rhythm and blues chassis in his very first single, ‘Maybelline.’”
— Rock and Roll Hall of Fame

In 1963, after serving one and a half years in a Missouri prison for violating the Mann Act, Chuck Berry emerged a changed man. Simply put, he felt he had been singled out for unfair treatment because of his race and, at the very least, he was probably right.

Gone was the carefree interloper who had scored so many 1950s hits by playing both sides of the American music culture (country honk in an R&B style) against the middle. His days of gleefully celebrating American consumerism and car culture were mostly in his rearview mirror.

Though the Beatles, Stones and the rest of the British invasion had recorded and released enough of his songs to make him a relatively wealthy man and an in-demand concert act, Chuck’s own songwriting, while less prolific, became a little more profound. Only three of the eight singles that Chuck released in the mid-1960s charted.

This is a shame really, because those three showed a craft and maturity heretofore lacking in his writing. The songs: “You Never Can Tell” with its exuberant marriage of American consumer products and heretofore obscure Cajun culture; “School Days” — a reworking of “No Particular Place To Go” that heavily referenced the recent introduction of seatbelts in American autos; and lastly, his real masterpiece “Nadine” — as compelling a narrative of urban frustration as has been written.

While Berry’s traditional business savvy was impressive, like all black artists in pre-Civil Rights era America, he had cut his teeth on the racism and brown bag economics of the Chitlin’ Circuit in the 1950s. This kind of meant “get your money up front or take a chance on not getting it,” or put more simply, “Trust no one,” which had been second nature to any Missourian, especially black ones, since before the Civil War.

Remember not only the sciatic racism that complicated any black performer’s career in 20th century America, but also the history of uncompensated cultural appropriation of black music by white artists in the interests of radio play and eventually television appearances. Specifically, white people re-recording black artists hits for more lucrative Top 20 stations.

More often than not, black artists, producers and engineers saw little compensation no matter how popular their songs eventually became. As a businessman, Chuck was very much on the lookout for such injustice, although his music (drawing on white, hillbilly honk and replacing risqué R&B banter with teen lingo that was just as suggestive, but deceptively “white sounding”) was radio ready for a white teen audience, thereby frustrating and confusing most copycat music industry vultures.

The onstage Berry that audiences were oftimes confronted with back then was still a duck-walking entertainer who played hit after hit, but still smarting from perceived persecution. He often treated the shows as a kind of minstrelsy and so brought only enough of what he felt was deserved of his talent to bear to each performance. He played with pick-up bands, many of whom had learned his licks from the Stones or Johnny Winter. For this, he was labelled uncommunicative and arrogant. Again, this seemed Chuck’s own brand of professionalism — with its own rules.

In 1971, while back with Chess Records for a few years, Berry scored his only No.1 hit with a live recording of a novelty “playground” song called “My Ding A Ling.” While a hit was a hit to Berry “the businessman,” for Chuck “the artist,” it was high irony if not an insult.

For most of the 1970s and all of the 1980s, Berry tried living quietly at Berry Park in Wentzville. He weathered a few scandals and even sponsored a rock festival but seemed never far from some sort of official scrutiny or harassment. Berry dealt with this by continuing to tour incessantly and keeping close to his home when he was off the road.

His professional relationship to nearby St. Louis withered and he rarely played locally except as part of a touring oldies package. He was no hermit, but he seemed not out to make any new friends. Boone County was seldom on Berry’s touring itinerary during this period. Unlike Ike and Tina Turner (another St. Louis-based touring machine who were a Columbia area staple for years), Chuck made only a few appearances at local venues like Corn’s Lake and the Hideaway through the 1970s and into the 1980s. Eventually he stopped coming period.

A lot of this changed, and not for the better, when film director Taylor Hackford and the Rolling Stones’ Keith Richards convinced Berry to publicly celebrate his 75th birthday with a concert at the (once segregated) Fox Theater in St. Louis and to film the whole thing for posterity. The experience was not an ideal one for most involved. Director Hackford still cites Berry’s attitude and behavior as impulsive, often negative and always confusing. Again, not a lot of empathy for the black artist from southerner Hackford, who went on to direct the tepid, but White Establishment Award (read: Oscar) winning Ray Charles biopic “Ray.”

The concert itself was incandescent, just dripping with talent and respect. A great experience. The film released as “Hail, Hail Rock & Roll” was anything but a celebration of Berry’s talent and legacy, as Hackford went out of his way to portray Berry as an impulsive control freak. True (or even relevant) or not, the film put the knock on Berry in a big way and once again he retreated from the limelight.

So closes Chuck Berry’s second act — and his career — had not the 1990s brought the appearance on the scene of two (white) Missouri impresarios and one intrepid Columbia Public School teacher to raise the curtain on a triumphant third act.

Tune in next month for Kevin’s final segment of his three-part adieu to a Rock ’n Roll legend, The Curtain Rises on 9th Street.