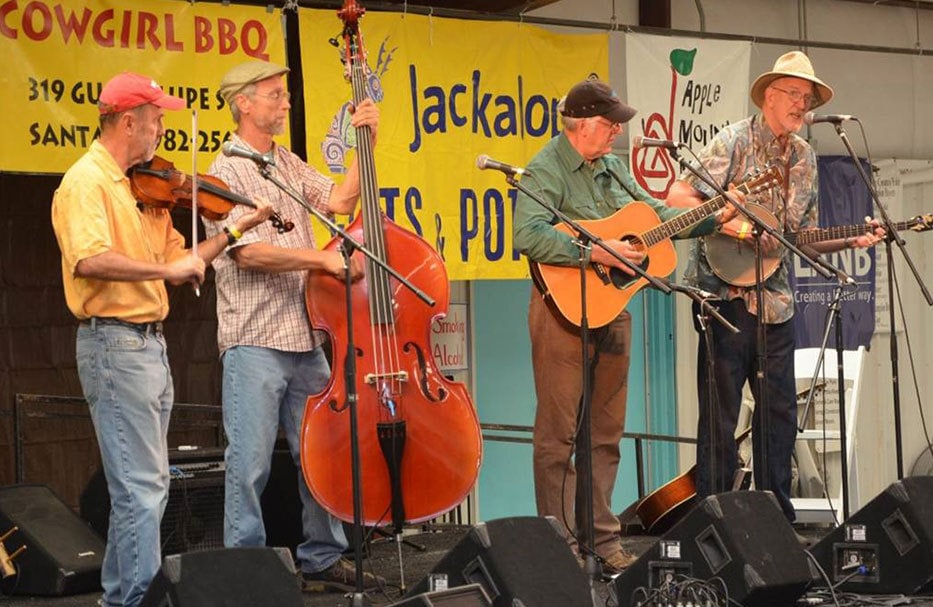 The world is so noisy … music has been wounded by Steve Jobs’ technology … the main role of the artist is to serve the song, as opposed to him or herself.” — Musician and actor Wil Oldham

There is something sincere, in this ironic age, about Prairie Home Companion’s Pat Donohue being a headliner in Boonville’s Big Muddy Folk Festival. After all, Garrison Keillor’s show is built around an imaginary small town in Minnesota, not that different than in-real-life Boonville. The lavishly restored theater that Prairie Home Companion is broadcast from is adjacent to the Mississippi River and is meant to evoke the confines of a 19th century music hall — much like Boonville’s Thespian Hall — the oldest “Opera House” extant this side of that Mississippi River.

To carry the analogy just a little further look no farther than the hosts: longtime actual Boonville residents (in contrast with Garrison Keillor’s imaginary roots) and world-famous folk artists Dave Para and Cathy Barton, who founded the festival in 1991 with creative partner, the late Bob Dyer.

The lineup this year is loaded with “The Real,” deeply talented and imbued with an historic respect for the traditions of folk songwriting and musicianship.

Besides Donohue, Barton and Para have relied on a lifetime of relationships in the folk music biz (such a thing?) to fill the outstanding two-night bill. Friday night will feature one of the world’s finest Irish fiddlers, Liz Carroll, playing with a master of Irish music: Chicago’s Jimmy Keane, on the piano accordion. The Adobe Brothers, a dance and concert band from Albuquerque, will also play Friday night, not to mention the Creek Rocks, featuring Cindy Woolfe and Mark Bilyeu. Bilyeu, you may remember, was a member of Springfield’s Big Smith. He and his wife, Cindy, will mix traditional songs with a tradition-bound catalog of original material.

Sharing the Saturday stage with Pat Donohue and Barton and Para will be Aremisia, a trio of classically trained female acappella singers from Chicago whose exactly timeless repertoire can swing from Bossa Cubana to Angus Dei.

Last but not least come Randall Chowning and Larry Lee, two founding members of the much-missed Ozark Mountain Daredevils, playing as Beyond Reach. I have an enormous respect for the ill-fated Daredevils, whose music was as dense and wonderful as it was Down Home Missouri, but their promising career arc was cut short by Music Industry mismanagement and bad luck. Ozark Mountain Daredevils offered the complexity and talent of Steely Dan in the best vernacular of rural Southern Missouri.

Terry Smith’s Big Muddy BBQ returns because what’s a Missouri music festival without adding the sweet smoke of barbecue to an already splendid atmosphere? The Big Muddy Folk Festival will be at Thespian Hall in Boonville on April 7 and 8. Tickets are $25 for each evening and $45 for both nights. Admission to all Saturday daytime sessions is only $5 and free with series tickets. Tickets can be purchased at www.friendsofhistoricboonville.org.

Chris Stapleton at Mizzou Arena on April 27.
Speaking of tradition, and a musician’s responsibility to keep it alive, many may not realize that C&W superstar Stapleton is a long time protégée of ex-local/ now Nashville hero Mike Henderson. In fact, you might call Mike Chris’ mentor.

Henderson, you may recall, was a founding member of both the Mid Missouri Hellband (bluegrass) and the BelAirs (Blues) before decamping to Tennessee in 1985. After establishing himself as a bandleader and studio musician, Henderson recruited a young Stapleton as a vocalist for his Grammy-winning band, the Steeldrivers (Grammy winners that featured other ex-Hellbanders).

At the same time, Stapleton and Henderson forged a songwriting partnership responsible for multiple chart toppers (even Adele has recorded their material). For an absorbing inside look at their unusual creative process check YouTube for a series of tutorial-type videos of Henderson and Stapleton inventing, designing and then assembling hit songs.